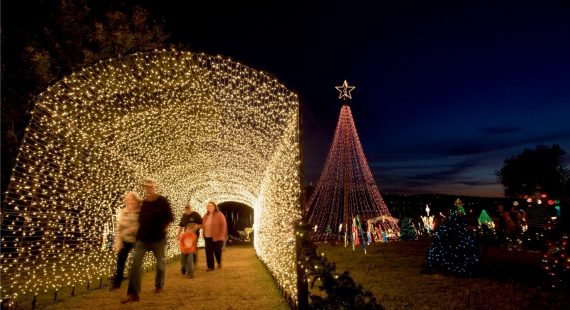 Leave it to the holidays to capture the effervescence of the Texas Hill Country with a lakeside display of twinkle lights that spreads joy all the way into the new year. Driving in on US-281 or passing through via FM2147, the Walkway of Lights celebrates the spectacular beauty of the holiday season, begging the casual observer to park the car and take a closer look with a stroll through the festive tradition. While lake life may feel dormant during the winter months, the Walkway of Lights ushers in purpose as the lights reflect vibrantly off Lake Marble Falls with a spectacular display of Christmas spirit. In fact, this was the original vision of one of the founders, Ron Mitchell, who sought to create an annual Texas Hill Country display of lights in 1990.

After endless preparation, the initial display of the Walkway of Lights is readily recalled by Mitchell, “The impact when [the Walkway of Lights first] lit up was amazing, it even amazed all the volunteers and financial supporters. We worked for nights and back then there was no blank space left over, in fact we wrapped hundreds of persimmon tree branches and constructed pole trees to fill in between all the displays. We also lit up the large Cottonwood Trees along the shoreline as well as draped the entire walkway with lights, garland, and bows.”

Back in 1990, while admiring the outline of main street venues, Mitchell noted how great it would be to display Christmas lights along shoreline during the holiday season. The design and structure of the display could be doubled by its reflection in the lake as well as the approaching view of this unique display from the elevated overview along FM2147. Mitchell’s vision was to design and install a walking trail of lights made up of hundreds of thousands of lights representing the spirit of Christmas and creating one of the most unique and exciting Christmas Lighting Display in the Texas Hill Country, putting Marble Falls on the holiday map.

“I felt in time it would become one of Marble Falls’ largest tourist attractions and favorite holiday show-offs for residents to their out of town family and friends. I knew it would be one of the largest viewed Christmas displays in Texas due to its visual ability to draw upon the thousands of travelers,” Mitchell said.

A theme quickly came together for the walkway of lights that centered upon the creation of a city of lights with a Santa Claus welcome house, greeters, a main street circle showcasing a towering Christmas tree, a high castle, doves, walkways lined with garland, lights and bows with an assortment of lit trees and sculpture scenes. Holiday music and activities would keep the walkway of lights city bustling, dazzling the children, amazing the teens, and sparking awe in the adults.

Transforming this initial concept into a reality takes generous community support and none other than Pat Burton or “The Queen of Marble Falls” was ready to take on the challenge. Burton spearheaded numerous beautification projects and was the spark behind many substantial fundraisers for the Chamber of Commerce and other city organizations. So, Burton and Mitchell met at The Bluebonnet Cafe to bring the vision to life, creating a longstanding tradition to the Marble Falls community.

With the necessary support and volunteer dedication, the first Walkway of Lights launched with almost every local business and social organization participating in setting up the walkway. It was truly a community effort. Local food vendors donated meals to teams of volunteers who worked late into the night. With over 100 volunteers participating, every sector of the Marble Falls community dedicated resources to the initial Walkway of Lights. During the first year, over $50,000 was dedicated by local businesses, the City of Marble Falls and the Chamber to construct the installation. The first Walkway of Lights featured 100 displays, over 200 lit trees, and 2,000 linear feet of lit garland and decorated paths, and 75 pole trees constructed out of 2x4s. A local lumber company donated the construction materials and local builder, Vance Fields, brought in his crew to construct the Santa House and the fencing and materials to protect the walkway. Patrick Carter took on the job of getting all the holes dug and the fencing erected. As the power needs quickly escalated, PEC was on hand to provide additional service, breakers, and electrical outlets. The installation became a passion project for the entire Marble Falls community and the Walkway of Lights was dedicated to the citizens of Marble Falls to commemorate the effort and support in bringing the spectacular project to life.

“I had the pleasure of turning on the switch as thousands of lights lit up and the first Walkway was born,” Mitchell recalls fondly.

Large crowds continue to gather for the opening ceremonies each year as Santa arrives by fire truck, school children perform Christmas programs, church choirs sing, refreshments are served, and photos are taken with Santa, all traditions that with the inaugural lighting ceremony.

As the Walkway of Lights enters its third decade, it is easy to see why it is such a time-honored tradition. Mr. Mitchell said, “it became an annual must see and a generational experience, now for some three generations. It remains a tradition thanks to the continued dedication so many have given to ensure the walkway continues.”

The annual holiday tradition is slowly making its way through generations as families that grew up going to the Walkway of Lights are now sharing the tradition with their children.

Maegen Fox Kuykendall’s grandparents, Nona and Mark Fox, were essential in organizing the first event in 1990.

It is a family tradition that she now shares with her daughter, Rellan, and this will be the first year to take her 4-month old son, John. Bailey Vercher also remembers walking through the lights as a child growing up in Marble Falls, a tradition that even made it onto the family Christmas card. Now she takes her two boys, Henry and Pearson, every year.

Thirty years later and it is hard to imagine Lake Marble Falls without the lights of the season reflecting off the water. The Walkway of Lights continues to spread joy and inspire awe in people of all ages, visitors, locals, and travelers alike, all thanks to the innovation and dedication of the original team that put the tradition in place 30 years ago.

The Original Walkway of Lights Team:

Hiking Through the Wilderness Near Marble Falls

Falling for Fall in the Falls